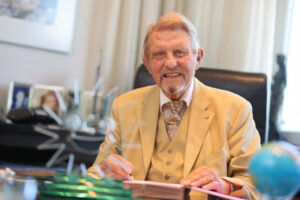 On August 26, Paul Gauselmann, founder and Gauselmann Group Chairman, celebrated his 88th birthday and looked back on 65 years of entrepreneurial independence – a decision he took on 25 May 1957. Since then, Gauselmann has created almost 15,000 jobs, and an internationally successful corporate group with total annual sales revenues of over 3.5 billion euros.

Born in 1934 near Münster (Westphalia), Gauselmann’s success story began with an apprenticeship as a telecommunications inspector. After seven years as an employee, he ventured into part-time self-employment in 1957 installing jukeboxes. This marked the birth of the Gauselmann Group and culminated in 1964 in full business independence. He worked for eight years as a development technician in the vending machine industry, four of which he served as head of development. In 1974, Gauselmann founded the first Spielothek.

Paul Gauselmann said: “I had the idea to turn the few box rooms of the former gambling hall into a gaming venue in the style of a three- or four-star hotel – with carpeting and hydroculture. A super idea as it turned out, and one that the whole industry jumped at.”

Three years later, he marked the next milestone and conquered the German market with his first proprietary slot machine, in those days without electronics. The “Merkur B” eclipsed all competing products with more gaming fun, and immediately doubled the enjoyment factor and cash results of the machines of the market leaders at the time. The company achieved its market-leading position in 1985 with a market share in excess of 50%.

In 2022, Gauselmann celebrated his 65th anniversary as an entrepreneur making him the group’s longest serving employee. In more than six decades, he has created an entertainment giant that enjoys success with its own games and machines, operates gaming venues across Europe and, in addition to land-based casinos and casinos on cruise ships, also has new online gaming and sports betting future markets in its portfolio. The Merkur brand with the laughing sun has become synonymous with the enjoyment of gaming. To the delight of its founder, the sales company adp is also celebrating its 50th anniversary this year.

In recognition of his outstanding commitment, he was awarded the First Class Cross of Merit of the Federal Republic of Germany as well honorary citizenship of the towns of Espelkamp and Lübbecke. His decades-long dedication to the vending machine industry for 53 years since 1966, including 38 years as Chairman of the German Amusement and Vending Machine Industry Association (VDAI), was honoured with the VDAI honorary presidency.

Gauselmann said: “Whether on the Management Board, the Supervisory Board or within the context of the Foundation – my family is both privately and professionally the most important pillar in my life.”

“What’s more, my four sons have each in their own field contributed significantly to the present success of the Gauselmann Group. I would like to say a very special thank you to my wife Karin, who has encouraged and stood by me for 55 years.”