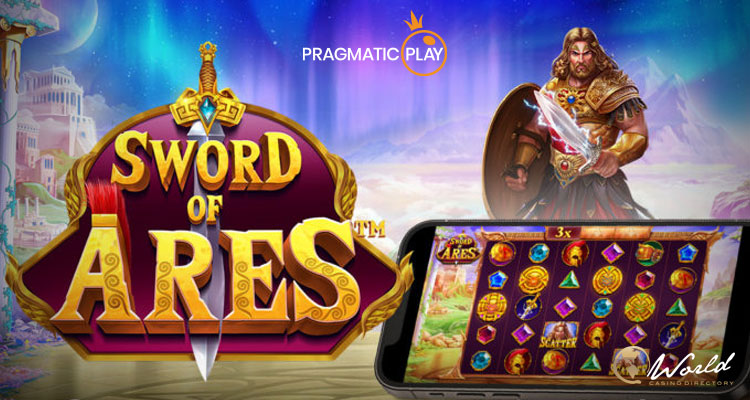 With its latest release, Pragmatic Play looks to show its players the strength and power of the Greek god of war and courage, Ares. The game is titled, Sword of AresTM, the sequel to the company’s earlier game, titled Gates of Olympus.

True to its title, the game’s main theme is Olympian god of war and courage, son of Zeus and Hera, Ares. Similar to Gates of Olympus, protagonist, aka Ares, stands by the reels, cheering from the sidelines each player who tries this exceptional game.

To win, players must form matching combinations of eight scatter symbols, placed left to right on the adjoining reels, beginning from the reel placed furthest to the left, on the new 6×5 grid.

The game’s volatility is in the highest range, which Pragmatic has rated 5 out of 5, while the RTP (Return To Player) is 96, 4%, which applies for all 3 RTP game settings. The game can be played in 2 ways, the normal default mode or buying Free Spins. If the player decides to buy Free Spins, the RTP drops a little, to 96,39%, but if he decides to play in normal default mode, the player’s paid spins can be gambled on for 20 p/c to 100 eur/$ and game can be played on any device.

The real key to making the most of this slot experience is the features such as tumble feature, multiple multipliers feature, bombs, and Free Spins.

The first feature is the tumble feature, meaning relevant scatter symbols are replaced over and over until the time runs out and then player can see his total win.

The multiple mutipliers feature represents several multipliers available throughout the game, but their function is different from other slots from the brand.

The meter showing 3 multiplier values in the base game is placed on top of the reels. Its worth is 6 values in the Free Spins bonus round. These multiplier values begin every new spin in a locked state. After tumbles, when the time is up, the number of scatter symbols combinations is collected and player can see his points, aka total win. When that happens, the multipliers are unlocked and total win is multiplied by the highest unlocked multiplier, which in the base game is:

Bombs are placed on all 6 reels. The slot consists of 4 types of bomb symbols in the base game, where they explode only if at least one tumble has happened, and in the Free Spins bonus round. When the bombs explode they stay on screen until player lose every scatter symbol. After that, they remove all symbols from the grid, which are collected by the multipliers.

A Free Spins feature, aka the Free Spins bonus round, requires the player to collect 4 or more scatter symbols in the base game to gain 15 free spins. This bonus round can’t be retriggered, meaning player can access it only once throughout the game. The multiplier’s meter is expanded during this round and available multipliers are:

During this round, it’s possible for players to purchase free spins and their worth is 100x player’s bet.

Irina Cornides, Chief Operating Officer at Pragmatic Play, said: “Sword of AresTM provides a crescendo of excitement with bigger multipliers being unlocked through the creation of multiple wins.

“This feature is further built upon in the free spins round and with a max win of 10,000x, Sword of AresTM will provide some surprising rewards throughout.”

Its portfolio is updated every month with seven new slots and the company is famous for its live dealers, tables, video slots, scratch cards, virtual sport games and bingo.